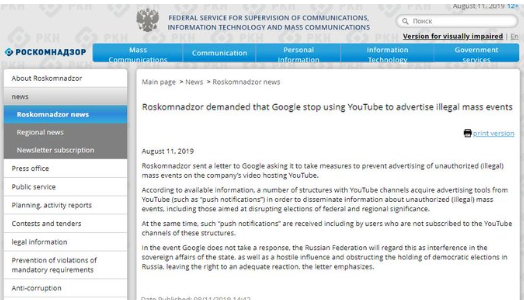 Russia warned Google in a Sunday letter not to advertise videos of what was reportedly the country’s biggest political protest in eight years.

The letter came a day after over a thousand protesters took to the streets of Moscow on Saturday calling for free and fair local elections; 311 people were arrested.

Roscomnadzor said some users had been buying advertising tools from YouTube, such as push notifications, in order to spread information about the protests, which drew tens of thousands of people.

The watchdog added in its letter that Russia would consider Google’s failure to respond to the request an “interference in the sovereign affairs of the state, as well as a hostile influence [over] and obstruction of democratic elections in Russia.”

Russia has cracked down on search engines in recent years by introducing laws that restrict specific search results. Search engines are required to share encryption keys, as well as the personal data of Russian social media users on servers within the country, with security services.

The country hit Google with a $7,663 fine in 2018 for failing to comply with the country’s laws requiring search engines to remove certain results.

While Roskomnadzor mainly bans sites for child pornography, drugs and suicide, some have also accused the media oversight agency of being a tool for “state censorship,” according to the Moscow Times in 2018.

“The regulator has blocked access to corruption investigations by opposition activist Alexei Navalny, the LinkedIn social network and the Telegram messaging app, and is currently investigating BBC Russia over possible violations,” the Times reported.

Content created by The Daily Caller News Foundation is available without charge to any eligible news publisher that can provide a large audience. For licensing opportunities of our original content, please contact [email protected]